skip to main | skip to sidebar

Why Are Moslems So Touchy? Because It Works!

A lot of folks in the blogosphere right now are asking---why is it that Moslems are so touchy about being insulted?
After all, Christians are insulted all the time, and generally with much more scathing insults at that.  But you don't see them beheading anyone, or even threatening the same. 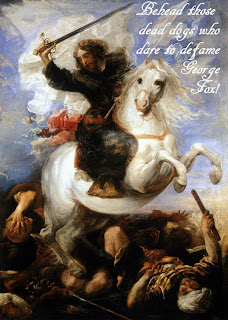 The truth of the matter is this:
Moslems are basically allowed by the Cathedral's rules of engagement to do nearly any damned thing they want to without severe reprisal.  This is because they're not considered white.  Only whites are held to universalist standards, and only the wrong kind of whites (non-elite and non-SWPL) actually get punished with any real frequency for violations of said standards.

But back to the main point.  The violence veto WORKS.  In the final analysis, there are two moves in the cultural war, violence and ridicule.  Ridicule trumps pretty much everything else, and is amplified by control over the media and cultural battlespace.  Everything except...you guessed it...violence.  The endgame of this is left as an exercise to the reader.

When your group's beliefs are subjected to ridicule, this lowers the status of its members with respect to the general society.  This is especially true when you're the ONLY such group that people are allowed to ridicule.  One might say there is in society a 'Law of the Conservation of Niggers'.  That is, society must always have a certain number of niggers, bitches, or whatever you prefer to call them.  Someone who occupies the rearmost seats of the bus.  Until Jesus returns, some group or groups will ALWAYS be the niggers.

One might also formulate a 'Theory of Optimal Persecution'...which is to say the proper amount of persecution to level to maximally surpress and marginalize a group.  Too much and you make martyrs, too little and they ignore you.  Moslems in their early phases of conquest seem to have found the sweet spot for their populations of interest.  The more courageous the population you're surpressing, ironically, the LESS harsh you should be (for instance, convert or die didn't work against the early Church when the Romans tried it, but convert or be a second class citizen and pay bonus taxes actually largely did over time).

Moslems get this, if only at a visceral level.  They're not about to allow their religion to face the twenty centuries of mockery and scoffing and ridicule that Christians have.  Let's face it, for most ordinary people, sacralized things and humor are like calcium and iron.  They find it awfully hard to maintain the numenous, holy state of something in their mind if it has ever been the punch line or butt of a joke.  Libertarians and the like just don't get this, because most of them are miles from neurotypical.  How many ordinary people, for instance, can laugh at Monty Python's 'Every Sperm is Sacred', and still maintain an orthodox theology of the body?

If you can you're probably not neurotypical.  There is reason why the Catholic Church used to censor the hell out of anything without its imprimatur.  It wasn't because they were stupid.

I think that using words which are rarely used outside your blog make it hard to read for beginners. For example: what is a SWPL? And what do you mean exactly by Cathedral? thanks

SWPL = Stuff White People Like. Based on a website but meant to connote college educated urban leftists.

Cathedral = Universities, Civil Service, and Big Media. All of these are generally leftist and reinforce each others power. Universities right opinion, big media push that opinion, civil service carry it out.

Felipe,
I'd answer your questions but the advocate for the devil already has quite nicely. I could avoid the use of 'Cathedral' or 'SWPL', but I'd probably need several sentences or a paragraph to get across my meaning unfortunately. Perhaps I ought to link a glossary?

Changing the subject now, since here we have fellow conservatives, I'd like to ask something: How would we define those naive liberal types, usually white woman, but not only, that favor immigration, political correctness, feminism, etc, etc. People that are completely naive about evilness and do the whole non-judgemental thing.

And besides naive mainstream women, there is also a large group of white man who are atheists, have no problem with immigration, fear and respect muslims, have no children, are usually not married, young and above anything else hate and seek to defamate at all times Christianism and Christians and Conservative political movements. Any idea for a label for those? I would not put them in the same sack as naive liberal woman, as they seam to have different views.

Basically I am searching for those people that make up the main support groups in favor of immigration and political correctness and name them. But somehow I can't find an appropriate term...

Felipe,
The word you're looking for for naive women is...
Nice White Ladies...
they're a serious problem for psuedo conservatives, and they're the reason why you see tons of minority speakers and such at their conventions. It's not to attract actual minorities, it's to appease the social status needs of the NWL demographic. Needless to say, I'm not fond of the fact that this group has the franchise.

For the other group, thankfully not that large although very vocal, just calling them atheists probably suffices. The more 'will to power' or nihilist atheist, of the sort that I was back in the day, is actually pretty uncommon. Nearly all atheists are fully communicated members of the Cathedral despite the fact that such makes less than no sense.

Note that there's a critical mass of violent actors (and sympathizers) required, otherwise blowing up abortion clinics and killing abortionists would have been much more effective.

One hard thing is to identify the difference between a Nice White Lady and an actual Liberal Leftist, like this one:

Because leftism has penetrated into the mainstream, I see leftist atitudes in mainstream woman. I think that nearly all young college educated woman are somewhere between those two types (including both extremes). So I wonder if it would be helpful to make a group in between those 2 extremes or if this is no use in yet another separation?

> Cathedral = Universities, Civil Service, and Big Media. All of these
> are generally leftist and reinforce each others power. Universities
> right opinion, big media push that opinion, civil service carry it out.

Strange that americans include Civil Service as part of the Cathedral. I am Brazilian currently living in Poland and in neither case I would add Civil Service as part of the Cathedral. In Brazil Civil Service is chosen via how many points you make in a written exam, so hard-working conservative people are picked, because the leftists are too lazy to study hard. Although nowadays they are pushing for racial quotas, so there might be a increase in black leftists. In Poland, well, I think that true nasty liberal leftists in Poland are rather rare ... over 30 then, nearly zero =D So that makes sure that they are completely absent from Civil Service.

In Poland the Cathedral is reduced to half of the mainstream media. They don't control anything else IMO. What I see of nasty leftism here seams to be essentially fallout which arrives in Films, Music, etc, from USA and western europe. But still despite that, it is horribly difficult to spread conservatism. Middle class young man seam to be convinced that Classic Liberalism is the way to go, and it is very hard to convince them otherwise. Also the more trendy half of the media attacks Conservatism non-stop, so it is very hard to convince young middle class people of Conservatism even with all the good arguments.

Somehow I feel that spreading conservatism in Brazil was easier. There marxism now holds total power, so the middle class (excluding marxists) feels completely alienated and is very receptive to conservatism. Classic Liberalism for various reasons is despised, so there is little ideological competition in the right wing.

> Note that there's a critical mass of violent actors
> (and sympathizers) required,

Indeed, that's for sure!

The easiest way to conservative up a woman is to wife her up and have her plop out some kids. Then she spends all day worrying about them rather then social issues.

Civil Service in America is very affirmitive action oriented. Most of the tests have been dumbed down. Also while the jobs pay more then prole work they pay less then private sector equiviliant professional work so they tend to be staffed by the worst of a given profession.

Then you have been blessed not to encounter our Civil Service. It's so bad foreigners who do would much rather deal with our Police [!!!] whom they consider much more professional and polite.

Which is true. Mind you our police don't often lose street or gunfights either. But they're very polite.